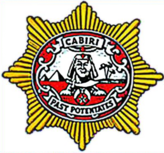 From the little island of Samothrace, at the northern end of the Aegean Sea, came the ancient Mysteries of Samothrace of the Cabiri, shrouded in the mist of antiquity. The little island of Samothrace was long the depository of certain august Mysteries and many travelers went to the Island to be initiated. The worship of the Cabiri spread from Samothrace into Etruria, Phrygia and Asia Minor. It has been said that Hiram, King of Tyre, was a High Priest of these mysteries and through him the leading feature of the Cabirian initiation was incorporated into Masonry and perpetuated in the legend of the third degree. Many conjectures that the order of the Essen, or the Essenes, grew out of the Cabirian Rites.

The Gods adored in the Mysteries of the island were termed Cabiri, an oriental word from Cabar, meaning great. In Arabic, Venus is called Cabar. The word Cabar belongs to the Hebrew, Phoenician and Arabic languages.

The secret ceremonies were performed at night in sacred chambers. By initiation, those who before were fellow citizens only, became brothers, connected by a closer bond of fellowship than before. The Initiate was regarded as a favorite of the Gods, and the Priests promised favorable winds, prosperous and safe voyages, and hospitality.

The Hierophants of Samothrace made something infinitely greater to be the object of their initiation, pledging them to virtue, honor, brotherhood and the assurance of those rewards which the justice of the Gods reserves for Initiates after death.

There ceremonies were inspiring and commanded the respect of all nations. The Romans, when masters of the world, did not violate its liberty and laws.

Our modern Cabiri, conceived on the island of Hawaii, is a challenge to our Past Potentates to carry on the precepts of the Initiates on the little island of Samothrace. Each year we assemble in brotherly fashion to commune in subtle but significant fraternization. Many travels from far distant lands to be present at the Shrine Sessions.