The Cabiri is dependent on Past Potentates for its membership and it is hoped that every Past Potentate will lend his support and become a member. It is not so important that you attend the Imperial Council Sessions or the Shrine Regional Conventions as it is that you unite in this effort to bring the Past Potentates into a little closer association within your own Temple or State. Remember, the Cabiri was organized for fun, sociability and a good time - it's later than you think. Your name should be listed in the "Book of Books" as an active member. If you are already a member, see that the other Past Potentates of your Temple become members of the Cabiri. 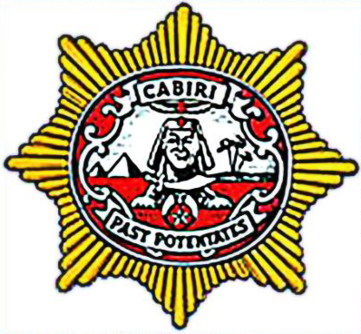 ​When a man has completed his year of probation as a Potentate, as required by the ritual, has tried his level best, has admitted his shortcomings, if any, admits he was the best Potentate during his year, he becomes eligible for membership in the sacred rites of the Cabiri. The membership now totals over 3,000 and we are growing each day.

Membership fee is only $200.00 and all Past Potentates are invited to join. Simply download the application below, complete form and mail/email with a check in the amount of $200.00 (USD) OR, pay by Debit/Credit Card by just clicking the Debit/Credit Card button below, and mail/email Membership Form to the Secretary: R. Keel Broom, Cabiri International, Post Office Box 8339, Warner Robins, GA 31095-8339 US or email: secretary@cabiriinternational.org.

Past Potentate
Once I was the Great I Am,
To whom all lesser lights salaam,
Respected, honored and obeyed,
An impressive sight when on parade.
My word was law none dare gainsay,
My slightest wish, supreme my sway,
I was a man of high estate -
The Illustrious Potentate,
Time marches on, another day
Another Pote holds magic sway.
There was a time - the Noble mob
Could see no future in the job.
But now The Cabiri, tried and true
Past Potentate all, not raw nor new,
United for service to Temple and Shrine
That the lights of Mecca may ever shine.